Virtual Reality applied to the prevention of bullying 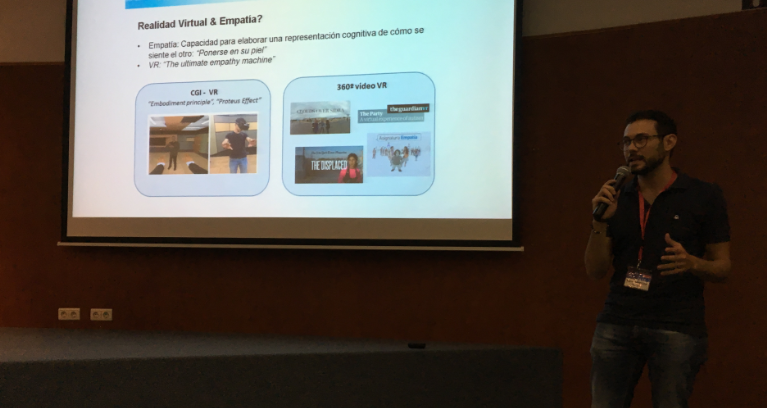 Eurecat launches a project to explore the effectiveness of exponential technology as an empathic tool in social care for minors.

During the Terrassa Serious Games Camp held on September 27 and 28, we had the opportunity to talk to Miguel Barreda, one of the speakers, who addressed Virtual Reality (VR) as applied to the world of healthcare. Miguel presented a project using VR as a tool for the prevention of bullying.

Miguel Barreda holds a PhD in Social Communication (Universitat Pompeu Fabra, 2014) and is an advanced researcher at the Data Science & Big Data Analytics unit at Eurecat, Centre Tecnològic de Catalunya. His research focuses on the analysis of the psychological aspects of the use of ICT and its effects on users.

Bullying can be defined as a form of intentional abuse, carried out over a period of time, by one or more students against another pupil or colleague, and in which there is an imbalance of power between the victim and the aggressor or aggressors. It can include actions such as physical or verbal aggression, spreading rumours about the victim, exclusion from the group and the theft of personal belongings.

Numerous colleges and schools have prevention programs and intervention protocols. However, the scientific evidence available as to its effectiveness is contradictory. In general, it seems as if these programs work, but their effects are slight, and they are still a long way from solving the problem completely. Therefore, in the face of such a serious problem, any tool that might prove effective could be very beneficial.

One of the strategies that seems to offer promising results is work on the students’ cognitive-emotional skills and, in particular, their ability to empathize with victims of bullying. In this respect, virtual reality has been called an “empathy machine”, which allows us to see the world through the eyes of others and understand their circumstances, the situations they face, and how these make them feel. If virtual reality could really generate empathy in other students towards the victims, it could be the perfect tool to complement the interventions that are currently being employed.

We will analyse what effect including immersive VR experiences has on empathetic responses, as a complement to more traditional interventions to prevent bullying. We’ll also examine how the entire intervention can be structured around the use of virtual reality, and we will launch a project in which the students themselves will create the content. Finally, in addition to traditional questionnaires, we’ll take psychophysiological readings and neuro-images of some of the participants, to provide additional measurements of the students’ potential empathetic responses.

The idea of using virtual reality for this purpose is not new, and recently some studies have been conducted at the national and international level. However, probably due to its novelty, we are not aware of any scientific publications that have systematically examined its effectiveness.

Aside from bullying, it could be useful in any context in which it is appropriate for the user to experience how the other feels in difficult circumstances. As a result, for example, several media companies have already produced VR content in an attempt to have the viewer better understand how victims of war and conflicts feel, and they’re also conducting awareness-raising experiments in the field of domestic violence, among others.

At the moment it’s a research project but, if the results are positive, we’d consider the possibility of, for example, developing a VR application protocol in preventive bullying programs to be used in schools and colleges.

A big thank you to Miguel, and the whole team at Eurecat for their help and hard work. It was a pleasure finding out a little more about a new form of healthcare which is technology-based and centred on the individual. We will follow closely any new developments in the project. Speak to you soon.